A Scania Truck Dedicated To ABBA 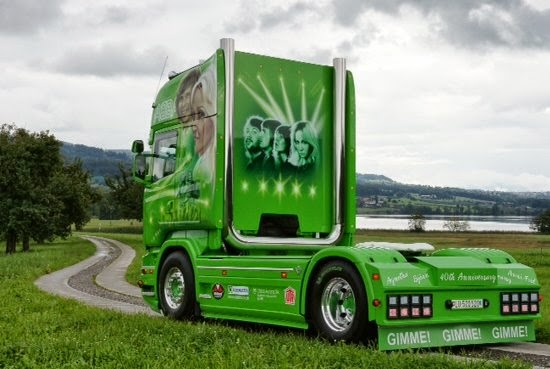 Mamma mia that truck, would say looking at the Scania R 520 Topline Streamline the trucking company Swiss Müller Ermensee, inspired by the Swedish group Abba. The occasion is the fortieth year of the group that is an evergreen. And green is the dominant color of this decoration.

It is not the first truck that Müller dedicated to celebrities. For example, one reminds the driver Jo Siffert, who died in 1971 at the Grand Prix of Switzerland. Obviously, to celebrate a Swedish musical group, the driver wanted a Swedish truck and chose the flagship of Scania. In addition, this livery debuted in Swedish Elmia festival, where it won the first prize in its category. "We have received many compliments," says Müller.
The decoration on the side shows the portraits of the members of Abba's Björn Ulvaeus and Agnetha Fältskog on the left, Benny Andersson and Anni-Frid "Frida" Lyngstad on the right. The front, however, shows the message The Winner Takes It All, which is the title of one of the most popular songs of the group. On the back we find all four musicians in a collective portrait. The livery was designed by Marcel Gerber and Urs Christen Hirzel, which took two months to complete the work.
We can see this Scania also on our roads, because Müller is using it to transport food between Switzerland and Italy. The company, in fact, is specialized in the transport of products at a controlled temperature. 2015 will be produced also a model.