On the 3rd of March 1977 - 36 years ago today - ABBA performed their first concert in Australia in Sydney. 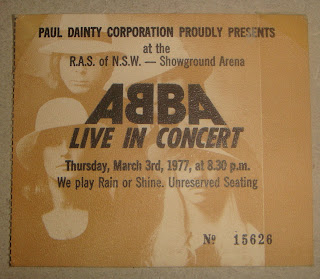 Most would know this was the concert with the rain - as featured in ABBA The Movie - who can forget that image with all the umbrellas !

Or the image of Frida on her hands and knees after slipping and falling - face down - on that wet slippery stage. This should never have happened ! 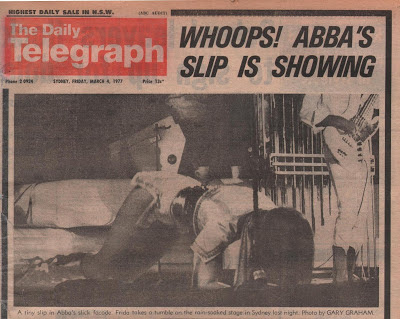 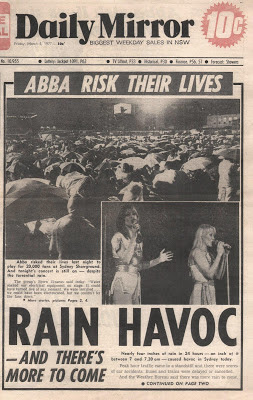 This was the concert I was at with my Mum and 3 sisters - what an awesome experience !
I find it hard to tell the story of that experience without getting emotional - as does my Mum :)
And for those that may not have seen or read it before, here is my story:

I was 8 years old - it was 3rd March 1977. We boarded a train on the Central Coast at 4am - my Mum, 3 sisters and myself. We arrived at the R.A.S Showground in Sydney at 7am. Fully loaded up with food & clothes in a suitcase, we sat and waited outside the Showground with everyone else. There were people everywhere, and as the day passed, the crowd swelled to huge proportions. The thrill of the wait was almost too much to bear - the buzz in the air was electric.
The time approached for the roller doors to open. The crowd surged towards those doors - and as the time approached 5pm, the crowd began to push forward. The excitement became panic for those at the front - being crushed against those roller doors - and it seemed to take forever for the doors to start moving up. People were calling for everyone to stop pushing - there were many children amongst this crowd ! My Mum and 2 older sisters did what they could to surround and protect me and my little sister - Mum showed no fear - so we felt no fear. We simply felt the adrenalin building in anticipation of getting in to the Showground - hopefully getting good seats - and of seeing ABBA. I can feel it now !
By the time those roller doors started to open, you could barely breathe - it was all too much. Mum told us 'When those doors go up, RUN !' mostly to avoid being knocked down by those behind us ... and that is what we did. My little sister in between Mum and one sister - and me holding onto my other sister. As she ran, my feet did not touch the ground. I was simply flying along behind her. We reached the seating on the lawn area of the Showground and she continued to run - all the way to the front rows of seats. We were in the 2nd row ! And we were there alone - Mum and my other sisters had not caught up yet. So my sister layed down along the seats to save them - no one else was getting those seats !

Finally the others arrived and we settled in for the next 3 or so hours - happily eating the food Mum had packed, and staring at that stage. Were ABBA really going to be right there in just a short time ?
It started to grow dark - it started to rain. Did we care ? Absolutely not. It was time !
Lights flashed on the stage, music boomed. Frida's voice rang out from backstage. We all screamed. And suddenly, there was ABBA - right there in front of us. Pure magic. Mum moved us around closer to the stage. We ended up directly behind the Police who were supposed to be guarding the stage, but couldn't take their eyes off ABBA. I was standing on the suitcase so I could see over them, and my sister was picked up by one of the Policemen and sat on his shoulders for the rest of the show. She had the best view ! We saw Frida fall on the stage, and we were horrified - but what a magnificent woman she was - so professional.  That rain !  We didn't care about the rain.
After the show we went to an Aunty's house to stay for the night. She was terribly worried about us being all wet and cold. My Mum said to her, "We don't care about that. We just saw ABBA ! We would have stood up to our waists in mud to see ABBA". And to this day, we all still feel the same. Check out the book I put together to celebrate the 35th Anniversary of ABBA's tour here in Australia:
http://www.abbafanatic.com/#/1977-australian-tour-book/4559632343