Agnetha to appear on Skavlan TV show on Friday.

This is a rough translation of the announcement: 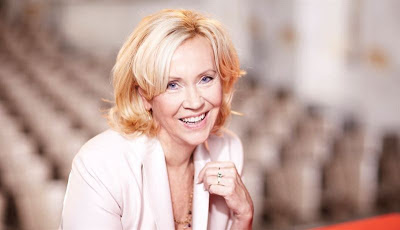 After nine year hiatus from the music could Agnetha Fältskog not say no when the producer Jorgen Elofsson got in touch with the three songs he had written to her. The album "A" comes out in May and the first single "When you really loved someone" was released earlier this week. In Friday's episode of Skavlan we will see the former ABBA star in his first Swedish TV appearance in a long time.

One of the greatest Swedish tennis star Mats Wilander, is current in the tournament the Kings of Tennis in Stockholm this month. Between games against big names like John McEnroe and Henri Leconte takes Mats Wilander time for a visit to Skavlan.

Dag Solstad is one of Norway's most award-winning and critically acclaimed author. In the new book "Dag Solstad. Oskriva memoirs "we learn a lot, not the least of man Solstad and the life he has lived.

Even Danish actress Sidse Babett Knudsen comes to weekly schedule of Skavlan. She has become a favorite of many politicians through its role as prime minister Birgitte Nyborg in "Castle".