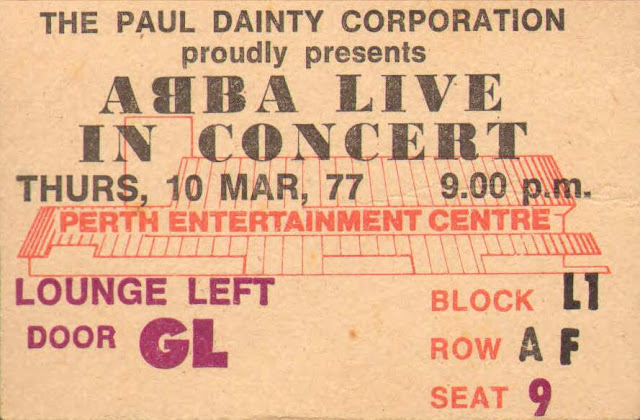 Both shows sold out – 8000 tickets sold for each show.

Tonight ABBA would perform the first two shows of the five they were doing in Perth.

Wow, what a big day this was in Perth – two concerts in one night !

But performing two concerts would not be the biggest thing to happen on this day for ABBA.

Audience members started arriving at the Entertainment Centre long before the first show was to begin. Although this was a fully reserved seating event - so need to line up, panic, run – I can understand that it was too exciting to not be there really early. The atmosphere would have been awesome in that crowd. I remember a real buzz in the air when waiting in line in Sydney – the knowledge that you were all there for a common purpose, to see ABBA ! – the buzz of excitement, anticipation – it really was a fantastic feeling to experience.

Show One started on time at 6.00pm and went beautifully and without a hitch to an adoring audience.
Well, that was until about 20 minutes before the end of the show according to reports.
However, it was during Intermezzo No. 1 that the hitch occurred, so it had to be a little earlier in the show than that.

As you will recall from scenes in ‘ABBA The Movie’, Benny gets quite involved when he is performing this piece – it’s an absolute joy to watch him.
Also during this performance, the other 3 ABBA members are not on stage – it’s just Benny and the musos.

So it is not strange I guess, that Benny was unaware that a situation was unfolding while he played.

A phone call was received by staff at the Entertainment Centre around 7pm. The caller, a woman, told the staff member that there was a bomb planted in the Centre to kill ABBA. They were told it was due to go off at 8.05pm – just after the 2 hour show ended. Hmmm, did the person think the show went longer than 2 hours ?

The information was given to Bjorn who was backstage at that time – and the decision was made by Bjorn to evacuate.
The funny thing is, they must not have passed on the information to ABBA at first.  Intermezzo comes further along in the show than halfway – which is where they would have been up to at 7pm. I guess there was discussion among staff first.

Benny was not privy to this information straight away.
After his number was finished, he noticed all the musicians had left the stage.
He also noticed that no one was coming back on stage. He told the audience “wait a minute” and consulted a stagehand. He then left the stage.
Then a voice came through the amplifier telling the 8000 people that there would be a 15-minute internal. They were asked to leave the hall in an orderly fashion. Bomb threat was not mentioned to the audience.

A member of the Entertainment Centre staff told “The West Australian”, “We have had bomb scares before, but have never taken any notice of them. It was Abba’s decision to empty the hall.” Honestly, how laid back were Aussies ? lol

ABBA were taken to their cars and drove away from the Centre.

The audience moved outside – assuming this was just an intermission - and were greeted by another 8000 people already waiting for 9.00pm show !

Police and bomb squad experts did a search of the Centre. They found nothing.

The show was delayed for about an hour – but ABBA returned, the entire audience returned, and the show went on.

Bjorn said of the audience afterwards “You love them even more after what they had to go through.” I find that very sweet – that he considered the audience went through something terrible – whereas it was ABBA that went through the terrible time.

I am sure most of you would be aware of the bomb scare in Perth. It is just a part of the history for the Australian Tour – as with the rain in Sydney.
But when you really give it some thought, you realise just how awful it must have been, for ABBA in particular.
I say them in particular, because Aussies were so used to bomb threats ! lol

ABBA however, had never been the target of a threat such as this before. They already knew Australians were crazy – so anything was possible right ? But this was extra crazy.
How scary for them not knowing how real the risk may or may not be.
It certainly would have had an effect on long term memories of this country, I’m sure.

I really hate that this happened to ABBA in Australia – and I feel shame about it.
But it just seemed to be the standard thing for certain people to do back then – make an anonymous phone call and say there’s a bomb somewhere. Easy bit of fun. Untraceable. Nuts !
They wouldn’t get away with that sort of fun these days would they ?

It really is annoying that this hoax took the limelight away from the actual concert – reports from ABBA’s first shows in Perth were about this instead of the performances.

It would be great to see some reviews for these shows.

The second show would have run until at least midnight if the reports on timing are accurate. Long night for them. I wonder how well they slept that night ?

Check out the comments below for some images and articles – and if you have any others, please do share J

Just one last thought – what happened with the concert tickets for Perth ? They really missed out having standard Entertainment Centre tickets – not the beautiful large picture tickets everywhere else had with the signatures on the back. I wonder why that happened ? 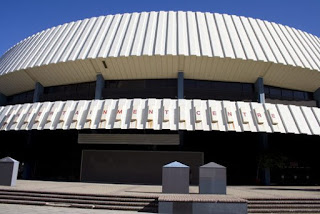 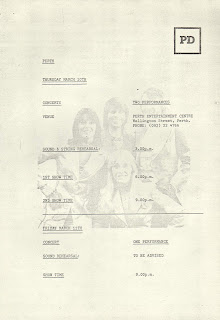 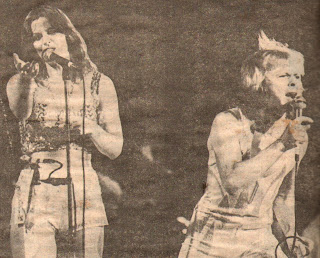 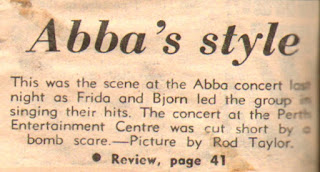 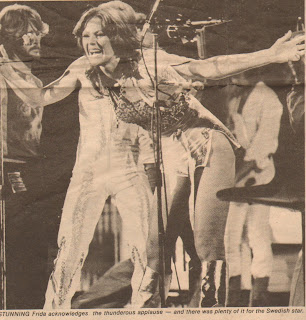 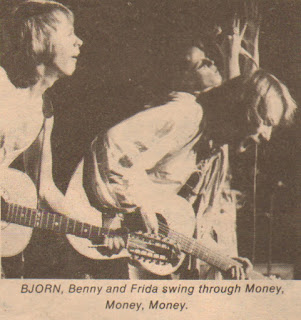 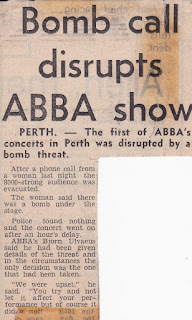 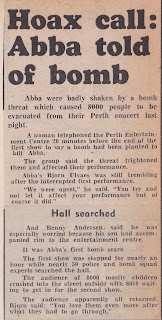 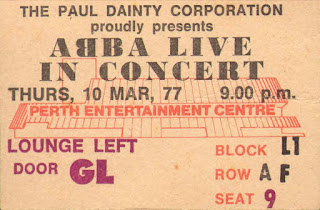