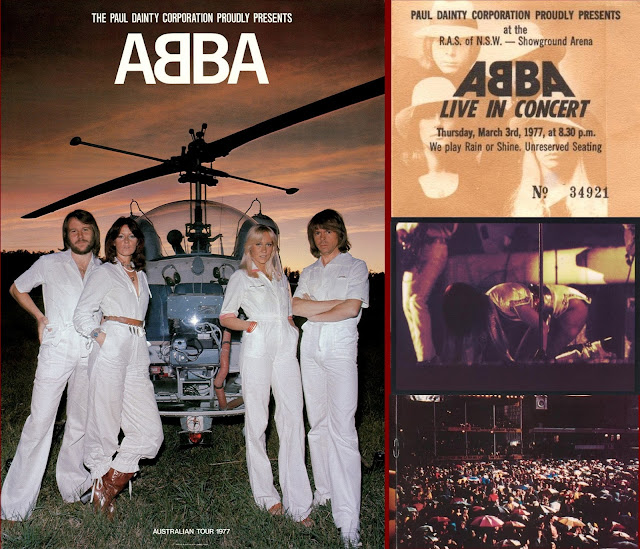 On Thursday 3rd March 1977, ABBA performed the first of their 11 concerts in Australia. It was held at the Showground in Sydney as there was no Entertainment Centre in Sydney until 1983, and no other indoor venue that could cater for such a show.

Most would know this was the concert with the rain - as featured in ABBA The Movie. Who can forget that image with all the umbrellas !
Or the image of Frida on her hands and knees after slipping and falling - face down - on that wet slippery stage.
Just two of the instantly recognisable images from this historic and amazing concert. 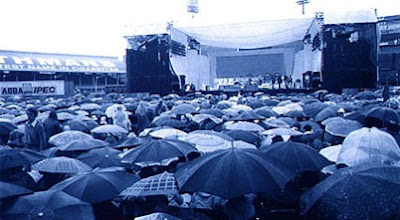 The concert ticket states “We play Rain or Shine” – who would have known that ABBA would have to stand by that statement on their very first night ?
Welcome to Australia - here’s some wind, rain and insects for you !
But I get ahead of myself – the insects came later.

In 1977, Australia’s population was 14.1 million people  – 160,000 of those people saw ABBA perform Live – and 30,000 of those people were at the first Sydney show. Tickets for the concerts had gone on sale the previous October on a first in first served basis – tickets sold out very quickly.

There had never been a concert tour undertaking such as this in Australia before ABBA.
A tour party of 117 people including a 17 piece Australian orchestra and a movie crew – 28 tonnes of sound equipment, 30 tonnes of lighting and a custom built hydraulic stage used to raise and lower the orchestra – a unique feature.
All being carted around the country in IPEC semi-trailers. It took 40 crew to set up and dismantle this equipment. 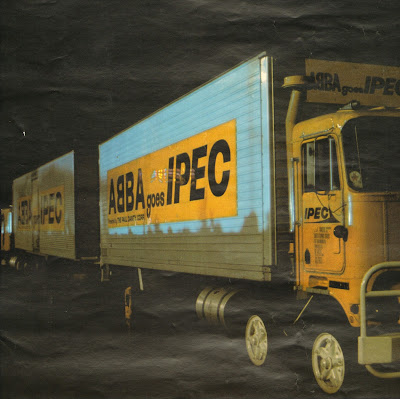 On this day in 1977 the weather was not good and there was uncertainty as to whether this concert would go ahead. But the crew continued to work on the equipment, finalising the set up - and Michael Chugg (Tour Manager) clearly remembers that stormy day and tells this story in the Bang A Boomerang documentary:

There was lightning during the setup  – and one of the tall metal towers used for lighting equipment was struck by lightning – unfortunately, there was a young guy working on the tower at the time who was flung to the ground from a decent height. Others ran over to where he was laying flat on his back on the ground. The young guy, apparently uninjured,  stammered, “ ffff*** did you see that?”. 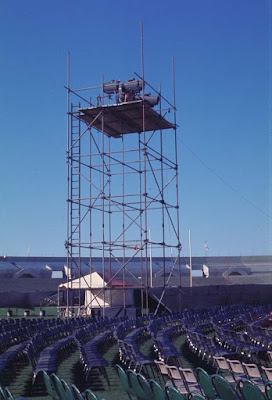 This was the beginning of what would prove to be a very eventful concert.
I often wonder what ABBA thought at the end of this day – one can only imagine.

The roller doors to the showground were due to open at 5pm. By that time there were already thousands of people waiting patiently outside. Many had camped overnight or arrived early in the morning to get a good place in line – including myself and my family. We arrived at 7am and spent the next 10 hours happily waiting in line.

As the time drew near, everyone moved in closer to the doors – in a nice orderly manner, still keeping our places in that line. Just before 5pm bus loads of people arrived and were let out right at the roller doors, at the front of the line ! The crush began – panic set in. People were being crushed and there was a lot of yelling. There were a lot of small children in the crowd and I remember a woman next to us bending over her child and holding on tight. My little sister and I (she was 6, I was 8) were protected by Mum and 2 older sisters. Mum told us “When those doors go up, RUN!” – she knew that the pressure from those behind would knock people down.
As those doors rolled up, the push was immense – some were knocked down – people ran over the top of them – and just kept running. It was craziness – and all because there were was no allocated seating. No one was prepared for how chaotic the situation would be.
People ran in every direction – everyone wanted the best seats.
My family and I ran too – all the way to second row from the stage !

Once the mad rush was over, and people had claimed their seats, everything calmed down – families sat chatting, eating, enjoying the moment. There was still 3 hours to wait.
During this time the weather had also calmed down.

But then, just before ABBA were due to hit the stage, the rain and wind started in full force. Images even show the rain being blown sideways by the strong winds.
This did not deflate the excitement of the audience however – and soon we would all be chanting “We Want ABBA”. Magic !

There had been discussion about whether or not they could actually go on and perform in those conditions. However, the decision had been that if 30,000 people were willing to stand in the rain waiting to see them, they couldn’t let us down.

So, ABBA took to the stage on time at 8.30pm and went into full flight even with rain pouring in on the stage.
During Waterloo, Frida’s enthusiasm would see her feet slip out from under her and fall almost flat on the stage, face down. She stayed down for quite a few seconds – she was winded – but then she lifted herself up on to one knee, threw her arms out wide to show she was ok, stood up and went on with the show. She had apparently sprained a finger and bruised her hip – but you would never have known she was hurt. Such a professional !
After this, crew were seen on the stage mopping up the water with white towels (rumour has it these towels were from the Hotel where ABBA were staying ! lol). Frida can also be seen with a towel around her neck. 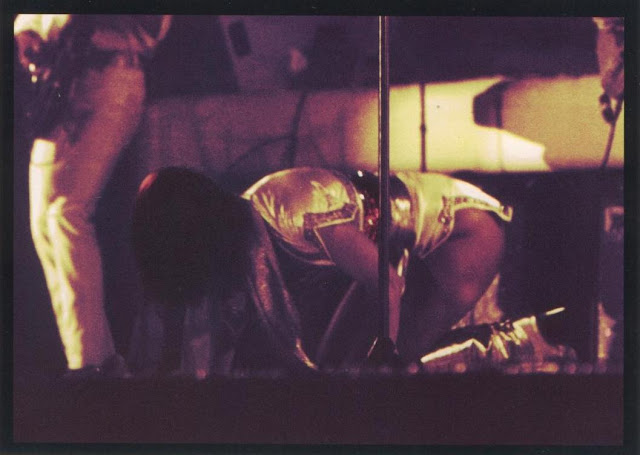 The rain continued for some time, but then stopped. What a relief ! Unfortunately, with all that lighting on the stage and the rain gone, ABBA were now subjected to another Aussie treat – insects ! Perfect conditions for them and they certainly got up close and personal with everyone on that stage.
Thankfully though, the rain started again later and the insects disappeared!

ABBA performed every song from their set list that night apart from So Long. I think that due to the physical nature of the choreography, it was decided that it was not safe to perform this song after Frida’s earlier experience.

To fully describe what this night was like as an audience member is quite difficult.
The rain didn’t matter, that’s for sure.
The music was loud – it boomed out of those sky high speakers on either side of the stage. I think many were shocked at how loud ABBA were – kind of like a ‘rock’ band J
ABBA performing on a stage right in front of you is a very surreal feeling – and what I remember most about that night is the feeling.
The atmosphere was electric (in more ways than one) – the excitement and emotion were almost too much bear.
It was pure magic – and one of the most memorable and recognisable concerts in ABBA’s history due to all the things that were not perfect.

I was so blessed to have been a part of this amazing event and for the rest of my life, it will remain the true highlight.

I doubt ABBA feel the same way – although when backstage waiting to start, Benny did ask if they had taken a photo of the sea of umbrellas out there because it was ‘fantastic’ !

I share here a part of the audience recording from Sydney 3rd March - concert start and 'Tiger' - raw, unedited and 100% Live ! Audio only: 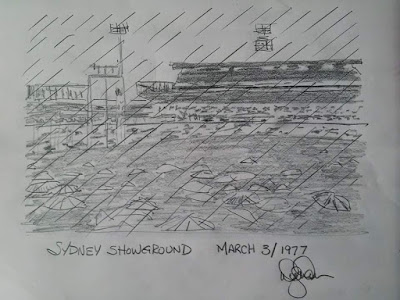 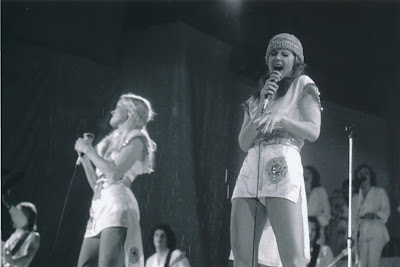 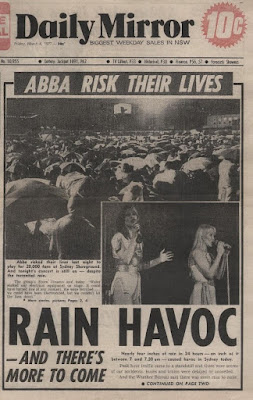 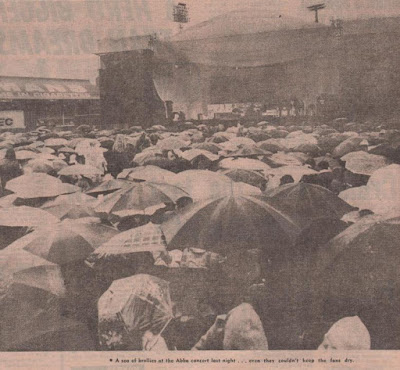 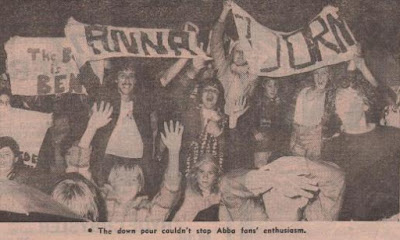 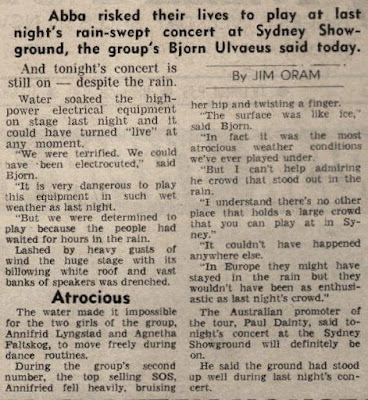 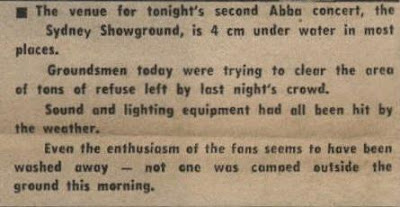 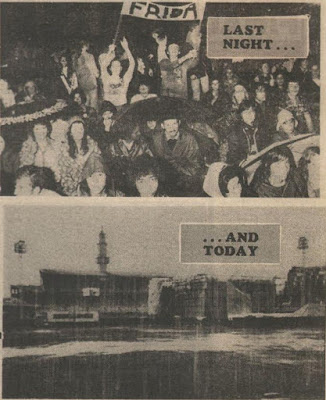 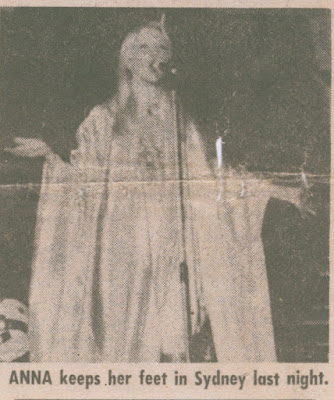 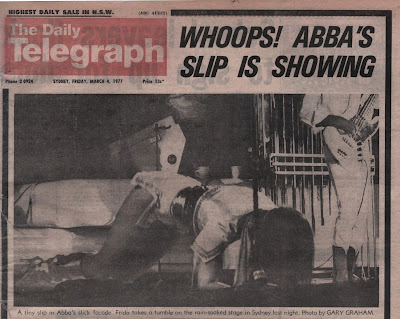 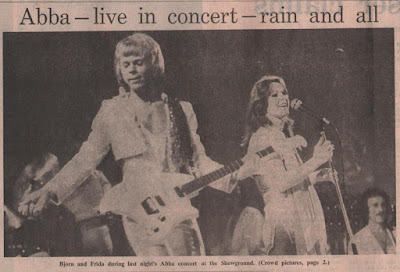 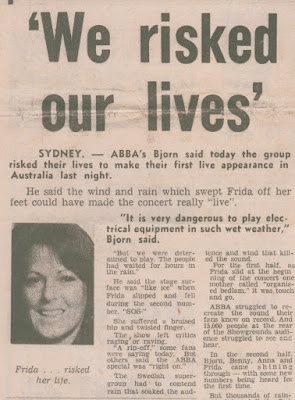 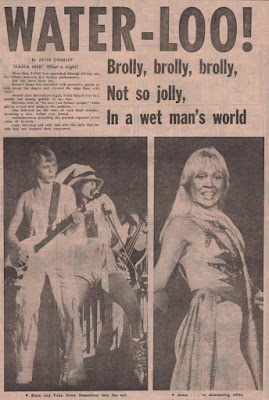 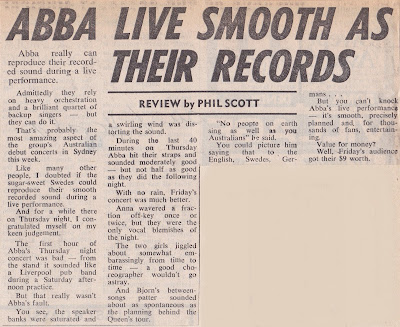 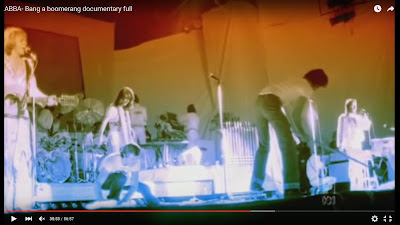 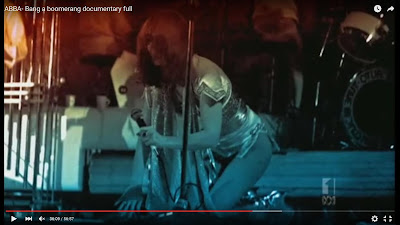 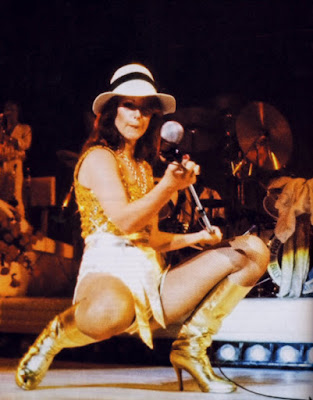 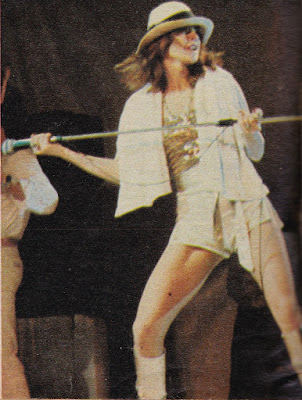