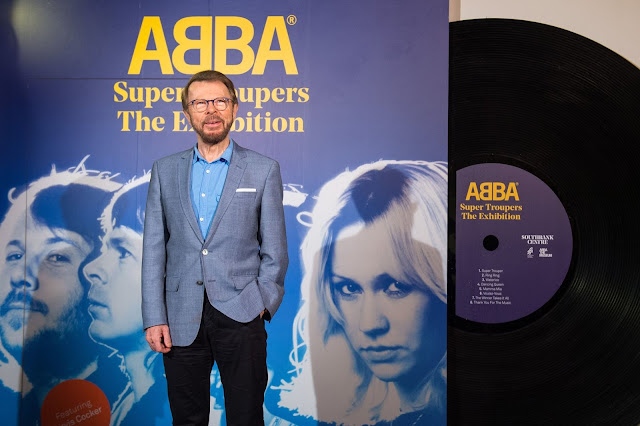 Well it's all very exciting and the media is coming in fast now.

Keep checking back as I will continue to add updates here.

Bjorn Ulvaeus gave ITV a tour of the Brighton hotel bedrooms the band slept in following their stunning Eurovision win in 1974. It's part of a new immersive exhibition at London's Southbank Centre.


Article from The Guardian:

Abba's Björn Ulvaeus: I had no idea 1970s Britain was so gloomy 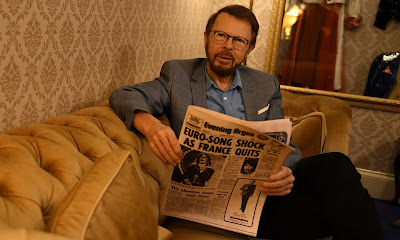 There were endless strikes, power cuts, three-day weeks, TV programmes that finished at 10.30pm and Noel Edmonds. “You get very close to the reality of Britain in the 70s,” said Abba’s Björn Ulvaeus. “I had no idea it was so gloomy.”
Ulvaeus was speaking at the first preview of a new immersive Abba show at the Southbank Centre, which aims to tell the sensational success story of the band, as well as put it in the social and political context of 1970s Britain.
Groups of no more than 16 will be taken through nine rooms recreating important moments from the band’s history. Narrated by Jarvis Cocker, the show contains more than 120 archive objects as well as, of course, loads of music. 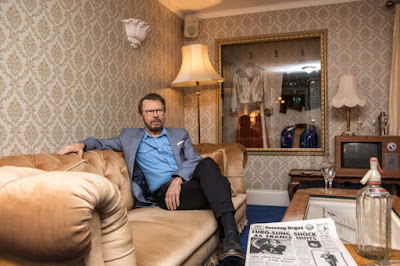 “It is the opposite of all those huge technically advanced virtual reality exhibitions that most of those pop groups have,” said Ulvaeus. “This is much more intimate, it’s warm, it’s full of a sense of humour.”
Abba burst on to the scene when they won the Eurovision song contest in Brighton in 1974 with Waterloo, beating Olivia Newton John’s UK entry. “The Abba”, as the TV commentator called them, were a much needed light in dark, difficult times.
Ulvaeus said the exhibition, a collaboration with the Abba Museum in Stockholm, made him realise how “impossibly gloomy” Britain was. “We were here for one or two days, now and then, so we didn’t quite know about this.”
It was particularly interesting to see news footage of the debate around whether to go into Europe, he said. “It was striking … how the Brits were hesitant about Europe back then, in the very same way as they are now, which is really sad I think.

“It was spooky. It’s the same thing again for some reason, trying to stay away from Europe. It’s like losing, not losing a friend because you’re still there, but somehow you don’t want to be in the team and I think that’s sad.”

For some visitors the London exhibition will be nostalgic. There is a recreation of a chilly 70s front room with depressing news reports on the telly, candles for when the lights go out, a copy of Look-In, and a Peters and Lee record that someone hasn’t put back in its sleeve.
An unnecessarily rancid nightclub toilet is lovingly reproduced with puerile graffiti on the cubicle walls, cigarette ends, unspooled toilet roll and vomit stains.
The show’s producer, Paul Denton, said the nightclub was there because it was where so many people enjoyed the music. “Abba only toured for three months in 10 years, which is unheard of for a band today.”

Other rooms in the show include the Brighton hotel suite – the Napoleon Suite – where Abba celebrated the Eurovision song contest win, a bottle of Cinzano on the dressing room table.
There is the Polar music recording studio where Abba made records from 1978 and where visitors can now demonstrate how brilliantly they too can sing Dancing Queen.
For diehard Abba fans, room eight may be particularly hard to bear: the split. Denton and his team have created a Swedish apartment full of half-unpacked boxes, just like the opening scene in Abba’s melancholic One of Us.

On the TV is the band’s last performance in the UK with a toe-curlingly awkward interview with Noel Edmonds on the Late Late Breakfast Show.

The Southbank Centre show is the finale of its year-long celebration of Nordic arts and culture. “It has been a fascinating journey,” said the artistic director, Jude Kelly. “It would have been impossible to celebrate Nordic culture without thinking about Abba.”
Ulvaeus said he never imagined Abba – who split up 35 years ago – would last like it has. “It is kind of weird, but you get used to it.”

He said he was exposed to his younger self in some form every day, which meant he seemed to him to be that “other guy, from way back then. But I’m proud of what he did, I wouldn’t be where I am today if it hadn’t been for him.”

Visitors sit in a recreation of ABBA's private jet in the Exhibitions final room. 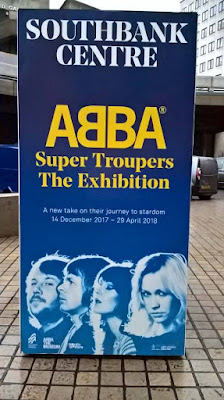 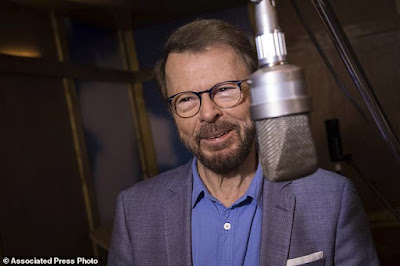 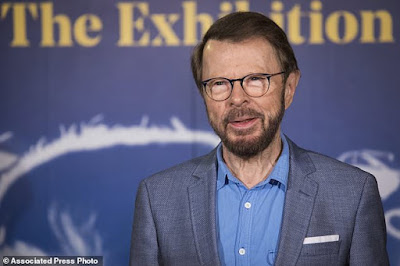 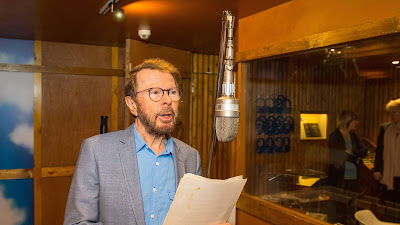 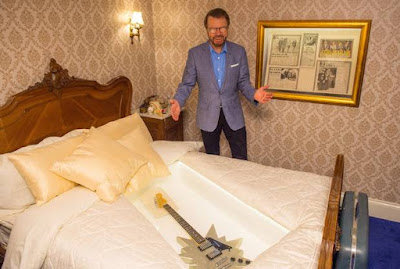 Abba’s Bjorn Ulvaeus: Performing together again would be too much hassle

An immersive Abba exhibition at London’s Southbank Centre takes visitors inside a dark and dreary British living room and a recording studio.

Abba’s Bjorn Ulvaeus said the pop sensations will never perform again because it would be “too enormous” – as he unveiled a show charting the rise of the band against the backdrop of “grim”, 1970s Britain.

The immersive exhibition at London’s Southbank Centre takes visitors inside a dark and dreary British living room, a recreation of the Brighton hotel bedrooms the band slept following their stunning Eurovision win, a recording studio and an aeroplane cabin.
Ulvaeus, 72, told the Press Association that the exhibition made him realise how “impossibly gloomy” Britain was at the time, with a collapsing economy, a three-day working week, and strikes.

“We were here for one or two days, now and then, so we didn’t quite know about this,” he said.
He said the London venue’s exhibition on another Nordic export, the Moomins, was one of the reasons he said yes to the “intimate” Abba show, which is a world away from “those huge exhibitions pop stars usually have”.
Ulvaeus said that wandering through the show had rekindled old memories, but that there was no chance of the hit Swedish band reuniting.
“I walked through yesterday and some of the rooms really took me back. Especially the (recreation of a) Sydney arena backstage,” he said.

“It was a dark, rainy night when we did a show there. It took me back. I was so surprised, I didn’t think it would. I really felt, this is what it was like,” he said.
“The hotel room in Brighton was like the room (bandmate and then wife) Agnetha (Faltskog) and I must have had, the bed in which I woke up at 4 o’clock in the morning the day after (their Eurovision win), finally realising what had happened, because everything was chaos before.
“It happened overnight so it was, ‘today we’re famous and yesterday we weren’t.”
But Ulvaeus said that performing as a group again was “not going to happen”, adding: “I think we don’t feel the motivation.
“The four of us, with live concerts, no. The simple answer is because we don’t want to. Why don’t we want to? I guess because it would be such hassle, it would be enormous. And it would take such… you cannot imagine the tension and the attention from everyone.
“So it would be like robbing yourself of, perhaps, two or three years out of your life when I could be paddling on my surf ski in the archipelago of Stockholm instead. There’s a choice.”
The star said that visiting the exhibition and watching old news footage broadcast from a TV in the 1970s living room made him realise some things in Britain had not changed – particularly controversy over Europe.
“It was striking on that telly, they showed footage from 1973/74, how the Brits were hesitant about Europe back then, in the very same way as they are now, which is really sad I think.
“It was spooky. It’s the same thing again for some reason, trying to stay away from Europe.
“It’s like losing, not losing a friend because you’re still there, but somehow you don’t want to be in the team and I think that’s sad,” he said of Brexit.
One of the items on display is a report Ulvaeus received from his music teacher at the age of seven, giving him a B minus, which has been unearthed from the archives.

“I was forced to play the recorder. They tried to make me do that when I wanted to play ice hockey. I was not interested in whatever that teacher had to say,” he said.
“I was probably very unruly during the lessons.  I was only seven or eight. At 12 I was given my first guitar and then I think I got an A after that. It turned around pretty quickly!”
Jude Kelly, artistic director of the Southbank Centre, said that the venue’s celebration of Nordic culture would have been “impossible without thinking about Abba”.
She added: “We have this idea that pop culture is throwaway culture. Unfortunately, there are still plenty of people who operate in the cultural space who think that pop culture has less value than what you might call classical culture.
“But if you think about what charts our lives…  we’re often looking at popular music.”

The Southbank Online Shop now has items available to purchase !

Check it out here: 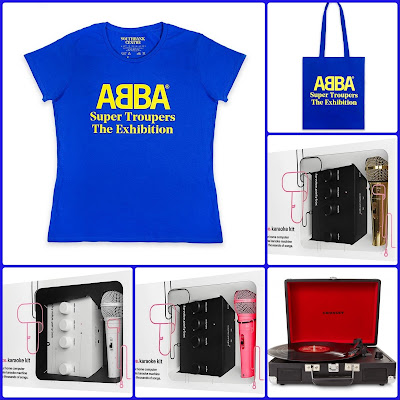 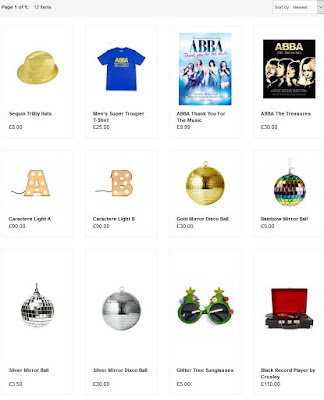 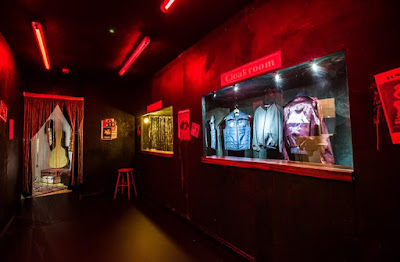 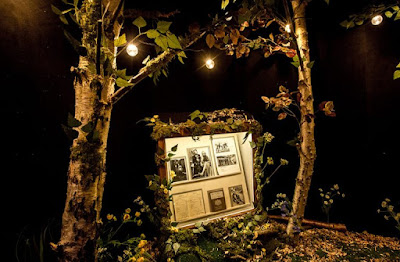 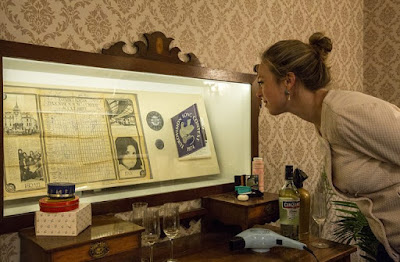