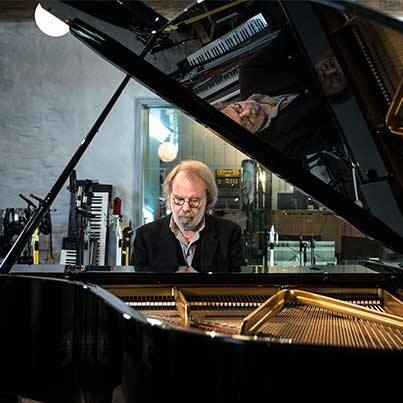 The musician and composer has recorded piano translations of ABBA songs.

"Benny wrote all his songs at the piano. Now his next album is clear and it's closely related to his piano."

The former ABBA member Benny Andersson is going to release a new solo album, reporting DN on Tuesday.The album contains new piano versions of the group's hit songs and also songs from the musicals "Chess" and "Kristina from Duvemåla". The album is called "Benny Andersson - piano" and will be released under a German record label called "Deutsche Grammophon"."Benny wrote all his songs at the piano. Now his next album is clear and it's closely related to his piano," you can read on "ABBA's" Facebook page.


The album with 22 songs is planned to release this fall. They will contain new versions of ABBA's "Girl's Rooms" (????????)  and "Thank you for the music."Benny Andersson met Björn Ulvaeus 51 years ago.ABBA's travel began in 1966, it was Benny Andersson and Björn Ulvaeus who met at a bench in Linköping and started playing together. After a while, the duo involved their Agnetha Fältskog and Anni-Frid Lyngstad partners.
It was the start of one of the most successful chapters in Swedish music history. Last year, the duo was honored for their efforts with a new bench next to the place where they met 51 years ago. The bench is sounded and a month ago, Ulvaeus visited the site."If we had not met here, I would definitely have chosen another course in my life. It's one of those things that has been completely fundamental in my life, "he said in an earlier interview.

The world's Abba fantasists have every reason to cheers. This fall, Benny Andersson releases a solo disc with piano versions of songs from his career - including from the ABBA era. "Continuing follows ..." writes ABBA on his Facebook page.

Everyone knows that the ABBA group is based on the four members' initial books - Agnetha Fältskog, Björn Ulvaeus, Benny Andersson and Anni-Frid Lyngstad.


This fall, the artist will release a whole new solo album with piano songs from his career.

According to Dagens Nyheter, the album contains a total of 22 tracks with the pieces from the musicals "Chess" and "Kristina from Duvemåla". And of course, the world's ABBA fantasists will also be heard because "Thank you for the music" is one of the songs in the collection.

As a teaser, Mastering Engineer on the album, Björn Engelmann, updated his followers with the following news:
"Delivering the pre-masters for Benny Andersson's solo album. This is amazingly fine and Linn Fijal has done a great job of recording and getting the grand piano to "fly".

"So proud to be trusted to be a small part of this album, which is released on Deutsche Grammophon ...That is all..."
Not long to wait, folks!