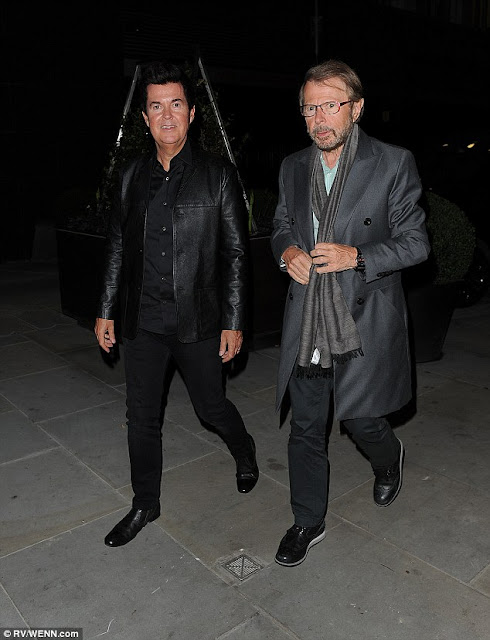 They recently sparked excitement among their fans by announcing they were reuniting for a special virtual project.

The famous musicians put on dapper displays, with Bjorn wearing a grey overcoat covering a turquoise shirt as well as dark trousers, black shoes and a grey scarf. 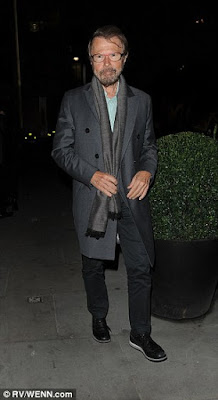 Benny dressed in a black suit jacket, a grey sweater and white shirt. He teamed the items with black jeans and shiny black shoes.
The musician slicked back his mid-length locks and also wore specs and rocked a silver beard. 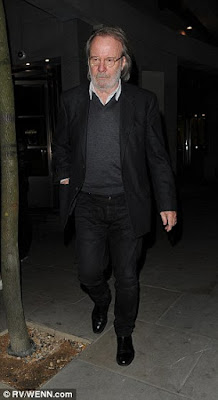 Simon looked in fine spirits smiling as he accompanied Bjorn to the eatery. He dressed all in black, combining a leather jacket with a shirt, smart trousers and Chelsea boots. 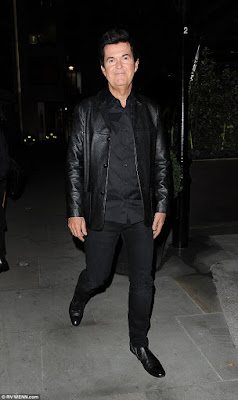 A full scale comeback might not be on the cards, but the pop quartet are set to give loyal fans the next best thing by reuniting for a ‘virtual digital entertainment experience’ in the new year.
The Swedish band have joined forces with Simon for the project, described as a ‘a groundbreaking venture that will utilise the very latest in digital and virtual-reality technology … which will enable a new generation of fans to see, hear, and feel ABBA in a way previously unimagined.’
In a statement released on Wednesday, Fuller explained: ‘We are exploring a new technological world that will allow us to create new forms of entertainment and content we couldn't have previously imagined,’ 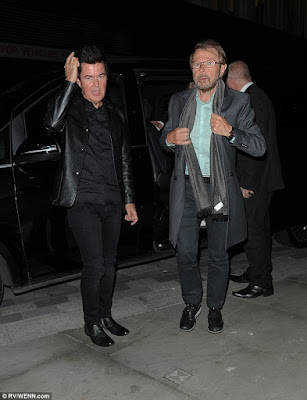 News of their latest venture comes 34-years after the band stopped recording as a group and four months after they reformed for a one-off concert at a private gala event in their native Stockholm.

The group, comprised of married couples Agnetha Fältskog, Björn Ulvaeus, Benny Andersson, and Anni-Frid Lyngstad, became one of the most commercially successful pop acts of all time after winning the Eurovision Song Contest in 1974.
But after topping charts across mainland Europe, Canada, Australia, New Zealand South Africa, Ireland and the United Kingdom - where they scored eight consecutive number one albums - the band performed for the last time in 1982.
While never announcing a formal split, the group's retreat from the spotlight was believed to be prompted by the collapse of their marriages; both couples divorced in 1980.


Reflecting on their new project, Andersson said:  'We’re inspired by the limitless possibilities of what the future holds and are loving being a part of creating something new and dramatic here.
'A time machine that captures the essence of who we were. And are.'

Lyngstad added: 'Our fans around the world are always asking us to reform and so I hope this new creation will excite them as much as it excites me!'


Despite disbanding almost four decades ago, the group have maintained an enduring appeal thanks to their extensive back catalogue of hits, among them Waterloo, The Winner Takes It All, SOS and Dancing Queen.
The enormously popular musical Mama Mia, which draws inspiration from the band's music, has also helped preserve their legacy while grossing for the £2 billion in revenue since its launch in 1999.
A film of the same name starring Colin Firth, Meryl Street and Pierce Brosnan was released in 2008.
To celebrate the news, Google Play Music has released the most streamed ABBA songs globally. The top ten include favourites such as Dancing Queen, Mamma Mia and Gimme! Gimme! Gimme!