ABBA Arrival The Album - Thoughts From An Artist - Mark B Timmins

Thoughts From An Artist

A young girl who is so dangerously infatuated with her teacher that she kisses him in the middle of a class.

An older woman looking on with joy and nostalgia as she watches a young seventeen year old girl enjoy her euphoric dancing oblivion. She is perhaps remembering when she was that girl?

A young woman who's heart is breaking as she knows that this day will be the last day that she will ever spend with the love of her life.

A young woman who is in love with a violinist and is so sexually frustrated with him not noticing her that she imagines what it would be like to be his instrument.

A woman who is expressing her sadness and regret over the ending of an irrevocable relationship and how it was inevitable.

A woman who is financially in dire straits who dreams of what it would be like to be financially wealthy and what she might have to do to get it by either marrying money or gambling to get it.

A young woman who is looking for a seemingly impossible kind of love and will not trade her independence for anything less than that love.

A young man who is tortured by the fact that he feels like a pawn in his relationship with his girlfriend. She thinks he is better off without her.

The lure, attraction and dangers of the city encapsulated in a prowling, devouring and violent beast.
The sound of Nordic angels departing the earth (and your stereo) after 35 minutes of aural heaven. A piece of music that evokes happiness and sadness in equal measure.


ABBA's Arrival was played and adored by all those young fans at the time (me included) during the mid to late 70s and just the sounds and the melodies were enough to hook you.

But as adults the themes on this album are ever more poignant as you grow older. This is the beauty of this album.

It is not a happy album, it just SOUNDS happy. One look at the serious cover artwork would tell you that this is serious stuff. This is the genius of ABBA.

This is when pop music actually means something. It is not throwaway. It is a series of melancholy stories dressed up in the most beautiful soundscape. The songs of reality clothed in the music of escapism. Arrival is a milestone album in pop music. 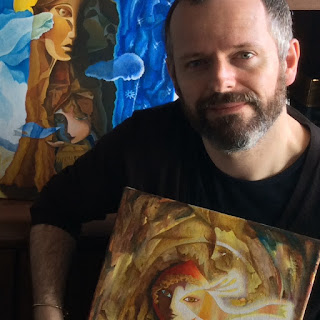 Follow the link below to explore Mark's stunning ABBA Cycle Of Paintings: