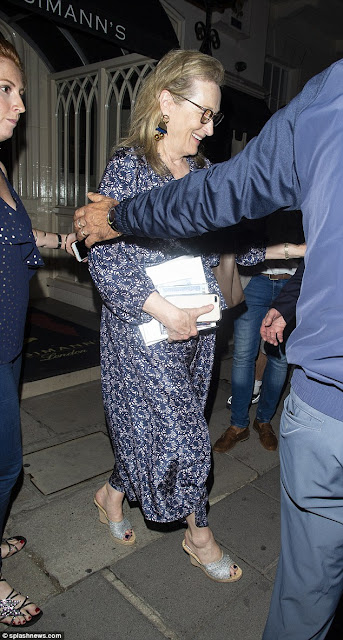 
It's set to be one of this summer's biggest movies.

And the Mamma Mia cast celebrated the film in style on Saturday, as they enjoyed an evening out in Mosimann's in London with ABBA stars Benny Andersson and Björn Ulvaeus.

The night out came as the tracklist for the film was revealed, and caused fans to wonder if a character is set to meet their maker.

Amanda Seyfried, 32, looked lovely in patterned navy dress which showed off her slender waist, boosting her height in a pair of black heels.

She wore her golden blonde locks off her face in a loose bun, with tendrils falling loose to soften the look. 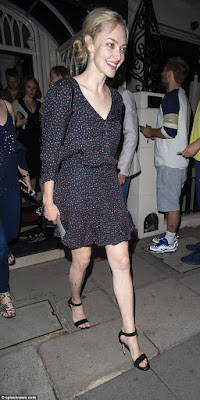 Meanwhile co-star Lily James, 29, opted for an elegant pencil skirt with frill detailing, highlighting her curves, and paired it with a spaghetti strap black tank top.

Lily carried a cotton candy pink jacket on one arm, and styled her blonde tresses in a relaxed tousled style. 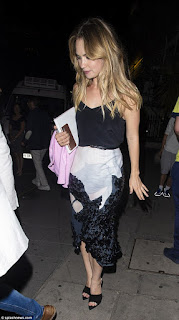 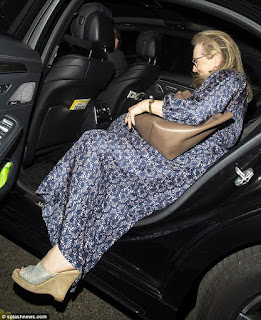 Christine Baranski, 66, looked sensational in gold as she commanded attention in a midi length gown. 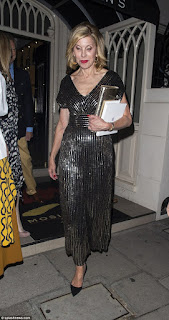 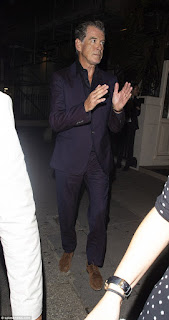 ABBA star Björn Ulvaeus, who attended the dinner, has spoken of his joy at reuniting with his former bandmates to record new songs.

The musician confirmed the foursome have recorded two new tracks but added there will not be a new album.
Speaking at a press conference for Mamma Mia, he said: 'We [himself and Benny Andersson] wrote two new songs and we went into the studio with the ladies [Agnetha Faltskog and Anni-Frid Lyngstad] and it was a fantastic experience.
'We have never been in a studio together since we split up in '82 and we looked around and this situation is so incredibly familiar and it took seconds and we were back like yesterday.

'It was great fun doing it again and the strange thing is when those two ladies start singing together there is that sound that is not like any other.
'It's just coincidence we should meet and they make those sounds together.'
The Swedish super group confirmed they would be recording new music together in April, nearly four decades after they split up.

It has been confirmed that virtual 'Abbatars' of the group are being created to represent the band members at the height of their fame for an upcoming digital tour.
Ulvaeus told the press conference: 'The new music that we have written was really inspired by a project that we are in where we are building heads that are copies of our heads from 1979 and we thought those heads have something new to sing.'

Set ten years after the original, the film follows Sophie (Amanda Seyfried) as she tries to run her mother Donna's (Meryl Streep) villa in Greece whilst pregnant, as she finds out more about her past.
In the film, Lily plays young Donna during her infamous time with her three love interests Sam (Jeremy Irvine), Harry (Hugh Skinner), and Bill (Josh Dylan).

Mamma Mia! Here We Go Again 'goes back and forth in time to show how relationships forged in the past resonate in the present,' according to Deadline.

The original movie was set on a Greek island where young bride-to-be Sophie discovers that any one of three men - Bill (Stellan Skarsgard), Sam (Pierce Brosnan) or Harry (Colin Firth) could be her father. 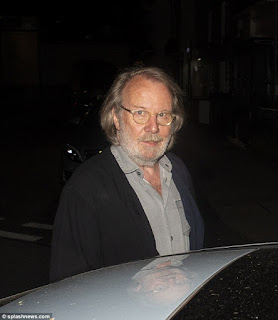 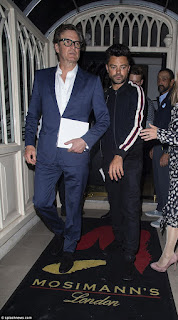 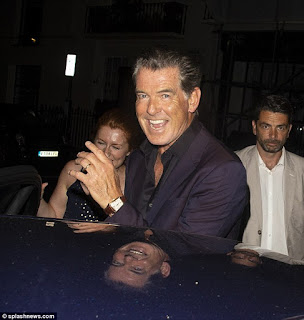