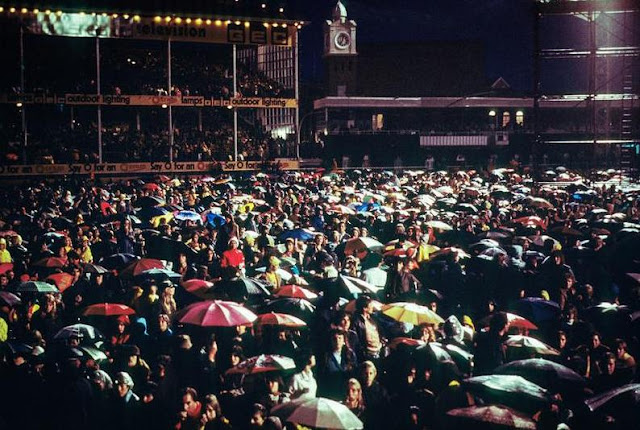 Tickets: $9.00 each - no allocated seating
On Thursday 3rd March 1977, ABBA performed the first of their 11 concerts in Australia. It was held at the Showground in Sydney as there was no Entertainment Centre in Sydney until 1983, and no other indoor venue that could cater for such a show.
There were 30,000 people at this concert !
As many would know, I did quite extensive blog posts about this tour last year, so I won't repeat myself too much this year. For those who missed the posts last year, here is the link for 3rd March: 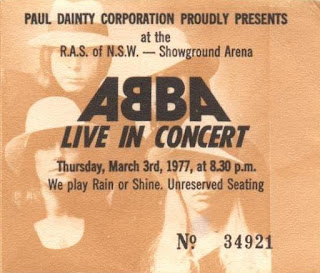 Promoter Michael Chugg, then a tour manager for Paul Dainty, remembers the chaos of the Sydney show. "The Sebel Townhouse got the shits with us because we took every white towel they had to keep drying the stage. But they played in the rain, the audience turned up in the rain, they just absolutely loved it. It affected everybody from toddlers to grandma and grandpa. It was incredible to look into the audience and see the spread of the demographic."
Check out the 'Bang A Boomerang' documentary for some great commentary about the tour - including Michael Chugg's entertaining memories :) 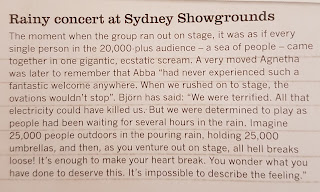 Contrary to the reports that Frida was unhurt by her fall during an energetic performance of 'Waterloo', it actually resulted in a contusion of her hip and 2 sprained fingers ! You would never have known that she was injured however, she was so professional.

Frida said: "The rainstorm came out of nowhere. But the audience were clearly going to stay whatever the weather to see us. So, in those circumstances, we were definitely going ahead with our show. The tumble shook me up, but that's all. It was a small price to pay when the fans were showing such a great loyality".
According to Lasse Hallström in the interview on ABBA The Movie Limited Edition, all Australian concerts were filmed with five cameras each, one steadycam on stage and four cameras on tripods. However, most of the material filmed on the first show in Sydney was damaged by water, hence some editing of the songs in ABBA - The Movie.
"We waited a long time for the rain to ease up. With so much electrical equipment around, guitars, microphines, sockets and so on, it made performing risky. However, we decided not to leave the soaking audience in the lurch, which was so much appreciated that we have probably never received such a rapturous reception anywhere – when we ran on the stage it seemed the ovation would never end." - Agnetha in As I Am . 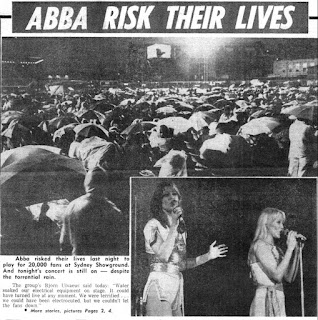 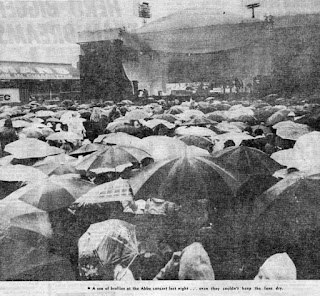 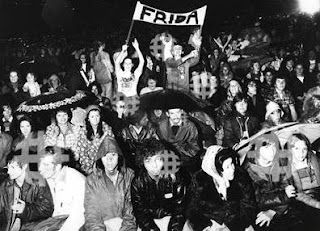 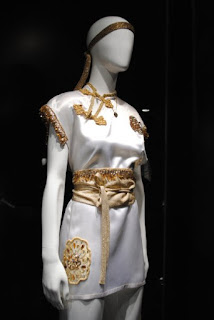 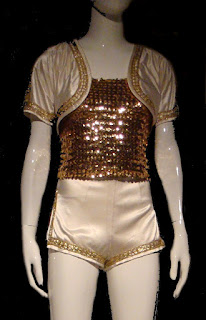 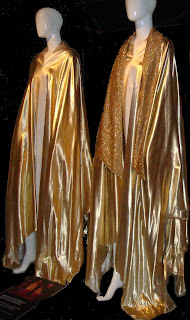