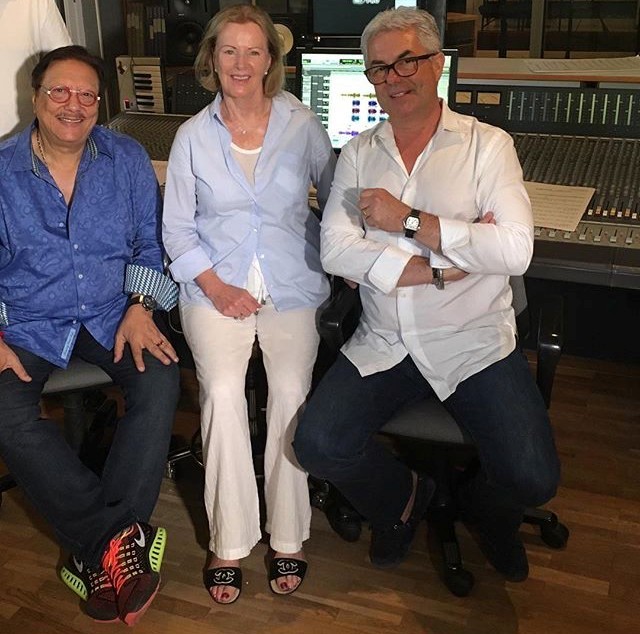 Arturo Sandoval recently talked about his new projects, the album "Duets" and a new "Christmas Album". FRIDA is of course mentioned for the "Duets" album, but it seems, that we have to be still patient with the release, before we hear FRIDA on her new recording of "Andante, Andante" on this new album. According to Arturo Sandoval in this interview, the album will be finished "when it is finished". Listen to this new TV interview at:


Arturo Sandoval About His New Album
Read The Interview Here:

So pleased to welcome musician, composer and friend, Arturo Sandoval, back to this program.
Born in Cuba, mentored by Dizzy Gillespie and now living in Los Angeles, the trumpet master and piano player is in the midst of recording two new projects, a Christmas album with Notre Dame University, and his first duets album with singers like Pharrell Williams, Placido Domingo and the late great Al Jarreau. Arturo, always, sir, an honor to have you on this program.

Arturo Sandoval: My pleasure, and thank you so much for having me.

Tavis: My pleasure, my friend. I know you and Al were friends. I know he recorded for your album. I just spoke at his funeral a few weeks ago.

Sandoval: I’m so sorry. I wasn’t here and I couldn’t attend it, man. But he was such a sweet guy and an extremely talented artist, of course. To me, he was the music, you know.

Tavis: So I’m curious now. What did he do on the album? What did you guys do?

Tavis: It was great [laugh].

Sandoval: Oh, no, no. So musical. You know what the best thing is? We were neighbors in Tarzana and then he came to my house and we spent the whole day. Now we have lunch together and we took a lot of pictures with my family. He was such a beautiful person and an incredible talent, incredible.

Tavis: While we’re talking about it, you’ve got some big names. I didn’t mention Stevie Wonder and others on this duets album.

Tavis: How did you choose the music for this new project?

Sandoval: You know what? I start to call friends and people who I admire and respect. Some of them replied, some of them no. Some of them say right away, and that was my first choice. The people who say yes, absolutely [laugh].

Tavis: Yeah. That makes it easy, doesn’t it?

Sandoval: Oh, my goodness. But it’s a very ambitious project because all those people have a lot of, you know…

Sandoval: With their schedule and then was still a couple of them. But the rest, we recorded all of them already. I did, oh, Placido, Josh Grobin, Juan Luis, Alejandro Sanz, Frida. All the people I recorded already.

Tavis: When do you expect that’s going to come out, that project?

Sandoval: As soon as we finish [laugh].

Tavis: Famous last words of an artist. As soon as I’m done [laugh].

Sandoval: And the project you mentioned about a Notre Dame University, a year ago I got a doctorate there in Fine Arts. That was such an…

Sandoval: Honor and a privilege. Then I mentioned that to the president of the school. I said I would love to do something with a different format that they have there. They have a full orchestra. They have a big choir. They have combos and big bands, a lot of things.
I would love to do with all the formation here, a Christmas album. They embraced the idea from the top and they love it. They said we’re gonna do it 100% and we’re gonna back that 100%, and we’re about to start.

Tavis: Well, Notre Dame, there’s some smart cookies there. You don’t have Arturo Sandoval offer to do something with your music organization and you pass it up, yeah.

Sandoval: But it’s a beautiful school and I was impressed with the whole thing.

Tavis: You know, I’m from Indiana. I grew up just down the street from that school.
Sandoval: No kidding?

Tavis: I’m from Indiana. I grew up just down the street from South Bend, you know.

Sandoval: I’m also going to share with you something that — I just come back from Jakarta, Indonesia. There was a great jazz festival there, great. Then we went in Europe before. But next week, I’m going to China for the very first time.

Sandoval: I never been in the mainland. I’ve been in Hong Kong, Thailand, Macao, all…

Tavis: Where you going? Beijing? Shanghai? All over?

Sandoval: I’ll let you know when I come back [laugh].

Tavis: Let me know, yeah. Let me now [laugh]. I been there a few times and I love it.

Sandoval: And then from there, we fly straight to New York to do a week in the Blue Note. Gonna be four weeks out.

Tavis: When you get a chance, I mean, you obviously were tutored by, you hung out with, drove Dizzy Gillespie around the island of Cuba, which I’m gonna come to in just a second, but when you get a chance to play in these iconic and historic venues like the Blue Note, do you feel the presence of all these other great artists who played there when you show up?

Sandoval: You nailed it. Absolutely, of course. I always said that. I always said it’s an honor and a privilege to be here in the same stage where so many incredible musicians have been playing over the years. Of course, something stayed there, you know, their presence you can smell. Man, how many good notes have been played here in this place, you know? And how many great artists have played there?
I enjoy it always because the people — you know, for me, the people made a big difference. It doesn’t matter where. I don’t care much what the name of the city or what continent. What really made a big impact on me is the reaction of the audience. Does the audience get very receptive and enjoy and have fun? Man, I’m in heaven. I’m in heaven. Doesn’t matter where. Could be anywhere.

Sandoval: I don’t know. I don’t even know. Is a trumpet player there?

Tavis: No, they’re gonna love you. Let me shift gears very quickly here. This is the first time I’ve seen you at least on this stage since Fidel Castro passed away. I saw your comments about him. I’m gonna read this right quick. Can I read this? You did not hold your tongue, man.

Tavis: I’m quoting from — hold on, hold on. I’m quoting from my friend, Arturo Sandoval, on Facebook after Castro passed away, and I quote. “The dictator has died finally. He was the worst kind of evil, the kind of person that hell even turns away.” You got to being so shy, man. What were you really trying to say, Arturo?

Sandoval: No. What I’m trying to say, everybody was waiting for that day because we shouldn’t be happy when somebody dies, of course. But it’s not as a person. It’s what he represent and all the damage he did. And, unfortunately, that moment when I find out the news, I said I felt it gonna be like as very happy day to make a big party.
No. I said no because he’s gone without paying for all the horrible things that he did and all the crime he did. He died in peace on the bed, you know, without being in the courtroom and the people prosecuting him for all the horrible things he did. And then that moment, I stopped being happy because I never thought that my parents were going to be gone before him.

Tavis: Your parents died before he died.

Tavis: But they never got a chance to go back to see their family…

Sandoval: Absolutely, and they died with that desire to go back and see their relatives. I said I can’t believe it. And the worst thing is not even that. The worst thing is his brother is the same thing, but worse because he’s more stupid than the other one, and nobody respect the brother there.
The people feel no respect. But the other one was good speeches. He gonna be good speech maker. He could sell ice to the Eskimo.

Tavis: What do you expect is going to happen in your native land in the coming years? What’s gonna happen?

Sandoval: I gonna reply that with a little joke. There’s a couple of Cubans. They find each other in the street in Miami. Hey, Juan. Hey, Pedro. How are you? How you doing? Man, last night I got a conversation with God. He say, what?
Yeah, we talk on the phone. He say, what you talk about? Man, a lot of different things. I asked a bunch of questions. You ask him, of course, what are gonna happen, the question you just asked. He say, of course, I saved that for the last one. What he say? He hung up [laugh].
Bottom line is, not even God knows, man. It’s unpredictable. But what I have to tell you is the situation there is worse than ever. Some people are confused and believe because they open, we really appreciate and respect the decision of President Obama to do what he did.

Sandoval: But the result doesn’t happen. The depression is worse. The people are more frustrated, more hopeless than before. And we couldn’t see the horizon, to be honest, unfortunately.

Tavis: You were kind to answer my questions about that. Let me shift gears in the three minutes I have left with you to something more happy. This horn looks sort of brand new. Is it relatively new?

Sandoval: Actually, I was saving a little money to make it gold-plated [laugh]. And, of course, I put here the ring of my best friend, my brother, the Fuente…

Tavis: Yeah, I see that.

Sandoval: But it’s a special horn. It’s a prototype, by the way. It’s made in Switzerland. It’s designed to play soft, pretty, mellow and romantic.

Tavis: Hold up, hold up, stop, stop. Soft, pretty, mellow and romantic, which you are capable of doing, which you’re gonna prove in just a second. But you are known for such a big sound.

Sandoval: Yeah, but big? I don’t know is that as a compliment or a complaint?

Tavis: No, it’s a compliment. No, no, no. Compliment. You get more out of a horn than anybody I know.

Sandoval: Thank you, thank you.