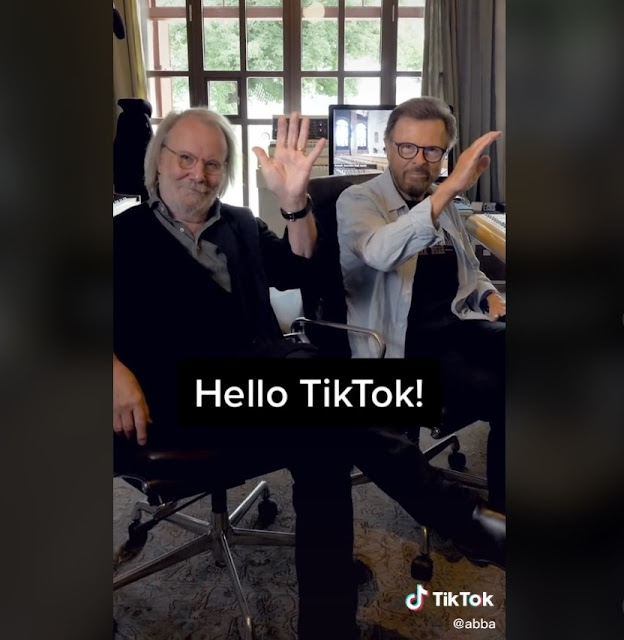 SWEDISH PRESS RELEASE FROM TIKTOK
30 AUGUST 2021
Following rumors of new music - ABBA joins TikTok.
Today, millions of fans around the world say "Thank you for the music" when the legends Agnetha, Benny, Björn and Anni-Frid announce that they are joining TikTok. ABBA's music catalog, Sweden's largest music export of all time, will now be available on TikTok and the group will also start an account on the platform. Björn confirmed earlier this year that the band will meet in the studio to record new songs and on ABBA's TikTok account, fans will be able to follow the latest news.
ABBA's greatness internationally does not need to be explained, especially not here in Sweden. Their beloved hits that have dominated the charts around the world are now available for all TikTok users to use in videos on the popular platform.
Of the music groups that are not on TikTok, ABBA has been the most sought after on the platform and their songs have been the most in demand. Until now, fans on TikTok have instead been allowed to sing ABBA's music themselves, and earlier this year the hashtag #DancingQueenChallenge, where users challenged each other to sing the immensely popular song, became a success with over 160 million video views. Iconic songs such as "Slipping Through My Fingers" and "Chiquitita" have also inspired TikTok trends with millions of video views around the world.
As of today, ABBA's music is available on TikTok's audio page and an official ABBA hashtag is launched for all fans, both old and new, to gather around. TikTok users can now use classic songs like "Dancing Queen", "Take a Chance on Me" and "The Winner Taked it All" in their videos. The band's official TikTok account @ABBA is now also live, where the first video is a piano version of "Dancing Queen".
The fact that ABBA joins TikTok and that their music catalog will be available on the platform is a first step in a larger collaboration between TikTok and ABBA, which has previously indicated that they have something very big going on. Fans can now follow ABBA on TikTok to take part in exciting news in the future.
- TikTok, and myself as a Swede, are so proud to welcome Agnetha, Benny, Björn and Anni-Frid to the platform and to offer Sweden's largest music export of all time to fans all over the world. Our users have already shown us with all their videos that this is the music they have been waiting for and it will now be very exciting to see how ABBA can inspire a new generation of fans and initiate a new wave of creativity with the songs that have so long defined pop music, says Farhad Zand, Head of Music Partnerships at TikTok.
ABBA Voyage on TikTok
https://www.tiktok.com/@abbavoyage?fbclid=IwAR1RF7Gn1bL3pdkJ-j4ZDxQyX9oTUPE1y67Deir-P4sjfyafGSi9_JIMO3Y&lang=en
ABBA on TikTok
https://www.tiktok.com/@abba?lang=en
Posted by Roxanne Dickson