ABBA singer Agnetha Faltskog has become a Loose Woman for the day as she was quizzed by Carol Vorderman.
The pair met up in London in front of the ITV cameras to discuss Agnetha's new solo album, her first music for over three decades.
But first she spoke about the UK's Eurovision hopeful Bonnie Tyler, and 63-year-old Agnetha said: “Does she need any advice? I don't think so. I think she has a great voice. I wish her all the best. Really.”
The former Eurovision winner went on to say that Sweden have a “very strong song” themselves for the event in Malmo at the weekend and that she would be watching.
Referring to her own music, Agnetha said: “It came out like this, I have a girlfriend who was calling me and saying that Jorgen Elofsson who was the producer and also composer of the record and Peter Nordahl the arranger would like to meet me and play three new songs for me. I was very curious and exciting and I just felt I had to do this.”


She took vocal lessons to get back to her best and the new album A even includes a duet with Gary Barlow, although it was not recorded together.
“When he did his recording in Stockholm, I was on vacation so I didn't meet him,” Agnetha said of the Take That star.
“I just heard his voice in the ear phone and I thought I have to match this wonderful voice in a duet, how can I do that? I just imagine him standing beside and we sang to each other.
“I recently met him here for the first time.”
Agnetha, who was married to bandmate Bjorn Ulvaeus as they had huge success in the Seventies, talked about her Abba roots for the interview which goes out on Loose Women today(THURS).
She is delighted people are still fans of the music and said: “Oh that means a lot, it goes from generation to generation and you can wonder why, it's because it's such a good energy in it, I think the girls and the boys want to dress like us and they want to sing along.”
But she admitting continuing in the band after her divorce from Bjorn was tough and put on a strain on everything.
Asked if she was still in touch with the other members, she added: “Yes I met Anni-Frid last summer in vacation, we sat down and had a long talk and got very nostalgic, we have a lot of good memories together and I meet Benny now and again in his studio and I meet Bjorn often because of the children and grandchildren.
"We see each other now and again.”
Sadly Agnetha finished the chat by confirming Abba would not be reforming.
As Carol, 52, cried “noooooo”, Agnetha said: “There's no way I think. We have our own separate lives now and it's so long way back, we are getting older and I think in a way we should let Abba rest.”

You can see the full chat on Loose Women today (Thurs) on ITV.


Agnetha recently revealed that she did not think Abba "sounded, or looked very good" even when they were selling millions of records in the 1970s.
In her first interview for almost 30 years, Agnetha said the band's shows were nothing compared to today's acts as they were not taught how to perform on stage.
And the reclusive star also admitted she never enjoyed appearing live.
She said: "I'm more of a recording person, I prefer to be private.
"I didn't mind doing videos, I can take that, but walking on stage in concert and singing live, that is a bit difficult. And I don't think we sounded or looked very good." 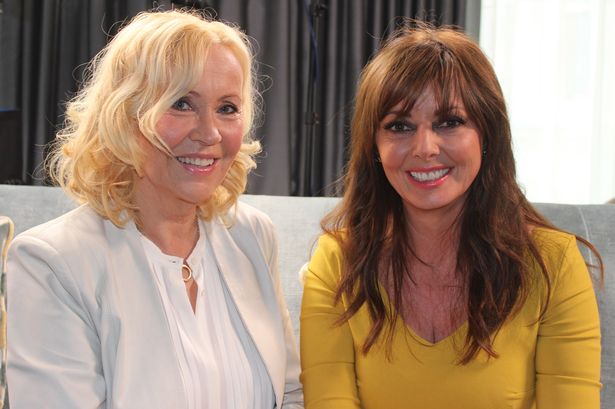