Agnetha Faltskog: “I have suffered from bad self-confidence” - The Big Issue May 2013 UK 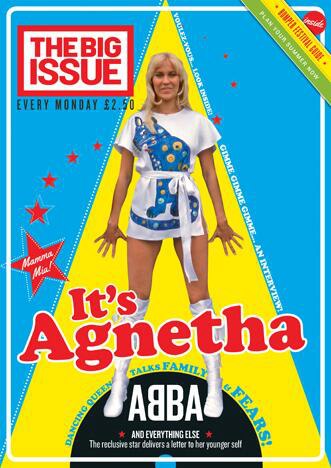 Ex-Abba star Agnetha Faltskog talks to The Big Issue about her return to music after more than 30 years.

After over three decades of hiding from the public eye, pop superstar Agnetha Faltskog is back.
Abba idol Agnetha was one of the most famous faces in music in the 1970s, as the Swedes’ popularity exploded across the world, before she disappeared from public life following the band’s split in 1982.
The 63-year-old’s solo album A is released today, but she told The Big Issue how a conversation with daughter Linda Ulvaeus almost put her return to the recording studio on ice.
Agnetha explained: “I talked with my daughter when I was wondering if I should record this new album or not. She said: 'Are you really going into that again? Think twice!' And I did. And then I did it!”
In a candid Letter To My Younger Self, mum-of-two Agnetha reflected on the pitfalls of success, how she has grown to handle her insecurities and the importance of self-confidence.
“I would tell my younger self that winning the Eurovision Song Contest with Waterloo in 1974 will be the most fantastic thing, but it will also bring problems,” she said.
“My daughter was only one year old, and when we had this enormous success everybody wanted us. It felt really bad leaving her, even though we always had good people taking care of her.
“By the time my son was born in 1977 we were all over the world. [ABBA sold 375 million albums and created hysteria at live shows in Australia and Europe].
“It wasn’t easy doing everything at the same time: world career, getting married, having two children during these years, and then having a divorce one year after my son was born. That was very, very difficult.”
She added: “I would warn 16-year-old Agnetha that she will need stamina. This life gives you a lot but it also takes. You can never be ill. Even if you have a fever you have to work. We had only two cancelled concerts during the Abba tours.
“At 16 I knew I had songs inside me, and she’d be pleased I am writing songs now. It’s not often I sit by the piano and compose, and when I decided to write a song for this album I had to work for it. But I think it is something that will stay with me.
“The advice I would give 16-year-old Agnetha about romance is: never give up! And rely on yourself. It’s so easy to have bad self-confidence, and I have suffered from that.
“Everyone needs someone who says you’re good, you’re very good, you’re better than you think you are. That’s important.”
To read the full interview with Agnetha Faltskog, buy this week’s Big Issue, on sale now